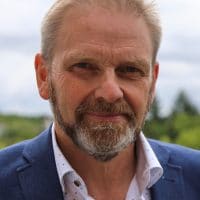 Volker Ratzmann, Executive Vice President Corporate Public Affairs at Deutsche Post DHL Group, holds a degree in law from the Free University Berlin. He began his political career in 2001, where he held several positions in the Bündnis90/Die Grünen parliamentary group in the Berlin House of Representatives. He was later appointed Secretary of the State Ministry and authorized representative for the State of Baden-Württemberg in Berlin.